Excessively dry air is humidified in air conditioners by water or steam. If we supply water or steam to the air in the state x1, h1, not only will its absolute humidity x change, but also its enthalpy h will increase by the heat contained in the supplied water or steam.

The humidification chamber of the air conditioning unit is showered with water. The flowing air takes some of this water in the form of steam, but most of the water flows back through the sump and is pumped back into the circuit. The humidifier therefore works mainly with circulating water. The water evaporated into the air is replenished using a float regulator.

The air stream into which the water is injected receives water vapor until it is fully saturated. No heat is supplied from the outside to evaporate the water. The heat required for evaporation is taken partly from water, partly from the sensible heat of the air; thus an equilibrium state is created in which the saturated air and the circulating water have the same temperature. This equilibrium temperature changes along a line of constant enthalpy until the air reaches a saturated state. This temperature is called the (adiabatic) cooling limit because the water does not cool to a temperature lower than this temperature. The cooling limit is the intersection of isoentalp (adiabat) with the saturation curve and is given by the initial state of the air, ie its temperature Tdp and relative humidity RH. The temperature of the air and water at the cooling limit is also called the wet bulb temperature Twb.
If the initial water temperature is below the wet air thermometer temperature, more sensible heat is transferred from the air to the water than is needed for evaporation. The water is thus heated until it reaches the temperature of the wet air thermometer Twb.
The state change in the h-x diagram takes place from the initial state of the air P1 along the line h (with constant enthalpy) towards P2, ie to the wet bulb temperature Twb, which lies on the saturation curve. However, this saturation curve is not completely achieved, since the efficiency of conventional humidifiers is about 95% at best.

Humimax and FA6 devices are suitable for this method of humidification. 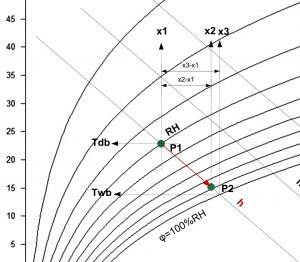 In this case, saturated water vapor is injected into the humidification chamber. This steam is generated in a local or central source – mainly in larger systems, where this steam is already available for other purposes (sterilizers and laundries in hospitals, etc.). After the addition of steam, the water content and heat content in the air increase. Δx is the mass and Δh is the enthalpy of the steam supplied. The heat content hD in saturated steam is very high due to the heat of vaporization, for example 2676 kJ / kg for steam at a temperature of +100 ° C.
The increase in heat content during steam humidification is:
Δh = hD ∗ Δx

The state of humidified air is determined as follows:
h2 = h1 + Δh
x2 = x1 + Δx
During steam humidification, the direction of the state change in the h-x diagram is given only by the heat content hD of the supplied steam. Therefore, most diagrams contain a directional scale “Δh / Δx”, on which the direction of the state change can be read and the change can be shifted in parallel.